Regarding fuel injection and engine control. I had several criteria to select an aftermarket Engine Control Unit (ECU). This should include:

All these seemed to be offered by the Electromotive TEC-3. Although it turned out, that making use of all these functions simultaneously, probably never had been tested out by the company. I realized that some functions will not work simultaneously. But it has given many exiting control opportunities.

I made a small control panel with linear control of ignition (+/- 10deg)  and mixture (+/-20%) offset during drive. This was very useful to understand pinking margins at different load and RPM versus mixture.

A wide band lambda sensor was used for continuous full range monitoring of the mixture. These tools and  the data-log on PC function were very efficient for mapping the engine.

Closed loop feedback from wideband lambda to the mixture map was used together with the data log function to correct the VE table for optimal fuel mapping.

This function works the following way: In a controlled lope mode, the mixture automatically will adjust to a range of your setting (ex. +/-10%) from the mapping points set in the programmed fuel table. The on-fly regulation is based on a programmed mixture table (RMP/load). Running a long data-log during the drive the PC program afterwards calculates offset to the engine Volumetric Efficiency (VE) table. A new table may then be loaded into the ECU. This process may be continued until most of the RPM and load conditions have occurred during drive. 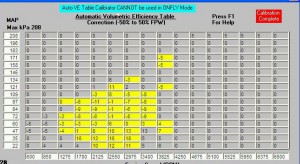 NOTE:
ECU on the road: Never do programming during drive. Too dangerous…