Car Power Source
The car engine is a machine that converts fuel energy to a rotating motion commonly measured in horsepower. In the engine gasoline is added to air through carburettors or fuel injectors on its way to the cylinder. The mixture is burned in the cylinder creating heat which creates pressure and turns the crank shaft.

The street engine will then burn approx 0.5 litre/min/100 HP 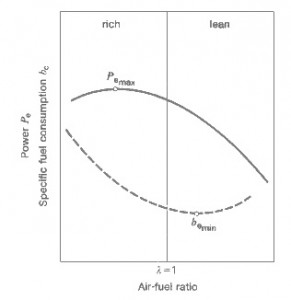 Volumetric Efficiency (VE)
Volumetric Efficiency is defined as how much air is really sucked into the cylinder on the intake stroke compared to the cylinder volume.
A cylinder will have some restricted intake, such as a small carburettor and loss in the intake filter and pipes.
A typical Natural Aspirated (N.A.) engine will have a VE around 80-100%. Maximum at maximum torque.
Let’s take at 1600cc four stroke engine and a VE of 95%
Each cylinder will suck 0.95×0.4= 0.38 litre air per two RPM

This shows that increasing the inlet temperature from 25deg C to 50deg C will reduce the air mass with 7,7% and then ultimately reduce the power with 7,7%.

Mechanical Efficiency
Depending of how much fuel gets into the cylinder, depending on the VE, and how much of the fuel gets converted to workable power, some of this power is used by the engine to run itself. The left over power is what you can measure on the dynamometer. The difference between what you would measure on the dyno and the workable power in the cylinder is the mechanical efficiency (ME).
Mechanical efficiency is effected by rocker friction, bearing friction, piston skirt area and all other moving parts, but also the engine RPM. The higher the RPM, the more power it takes to turn the engine.
ME is often expressed in terms of friction horsepower.